Having overcome all traces of selfishness and desire, Siddhartha Gautama entered a deep meditative state in order to realize the ultimate reality – not merely for his own life benefit but for the sake of all beings. Throughout the night he sat recalling his previous existences, until at dawn he achieved perfect Englightenment. He had become a Buddha, an ‘awakened one’. 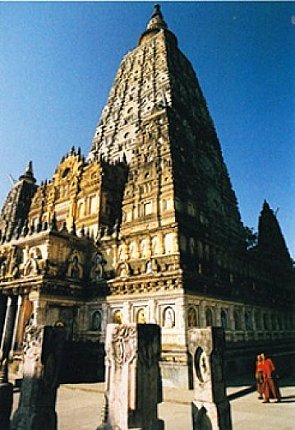 For several weeks the Buddha remained in meditation beneath his tree. During this time he was visited by the gods Indra and Brahma, who begged him to share his experience with others for the benefit of those who would understand teachings.

The Mahabodhi Temple at Bodh Gaya marks the site of the Buddha’s Enlightenment and is an important place of pilgrimage for the Buddhist faithful. Although the present building dates from the twelfth century AD and has been restored many times, the original temple is said to have been founded by Ashoka in the third century BC. A descendent of the original tree under which Shakyamuni meditated still grows in the grounds and is known as the “Bodhi Tree”.