Home / About Buddha / Enlightenment of Buddha

Siddhartha Gautama, the Buddha had been dwelling and thinking about the misery, pain and suffering of people while he was in the palace. Realizing these severities led him into the path of achieving the Enlightenment. One day he decided to get out of the palace in search of the real happiness and freedom in life. So, while wandering he found a place in India called Bodhi Gaya where he regularly without any worries practice meditation. Gautama had a belief that through his constant effort and commitment for rejoicing himself with the greatest knowledge and attainment of enlightenment, he sat under a tree for indulging himself in meditation.

As Gautama Buddha sat in deep meditation, the internal vibes like emotions, freedom, the joy of being in outside world tried to pull him. Further, Mara the Lord of illusion appeared to him with an intent of distracting. But Mara failed because when Buddha touched the earth, the holy earth under him shook and defeat the demon armies. In this epic battle, the compassion and wisdomof Buddha win over the illusions. 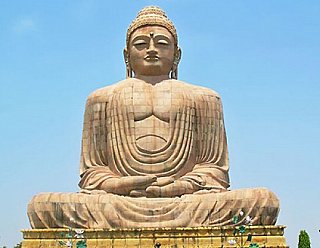 Bodhi temple where Buddha achieves the enlightenment now has been one the historical and famous pilgrimage site for devotees. After the 250 year of Enlightenment, the emperor Ashokavisited the site and erected a diamond throne shrine monastery. Inside the temple there is a big statue of Buddha “Bhumisparsha mudra”. The colossal is said to be 1700 years old and is facing towards east precisely where the Buddha meditate and at his back there is a bodhi tree.Buddha continued to meditate for seven weeks under the bodhi tree after enlightenment. And the seven things he observed are as:

Under the Bodhi Tree

During the first week he sat under the tree, enjoy the experience and freedom of being the awakened one. He was independent from wrong thoughts, serene and ecstatic.

Gazing at the Tree

During the second week, he pays gratitude to the Bodhi tree which provide him shed during his struggle for Bodhisattva. The Buddha stood in front of the tree and meditates without moving his eyes.

In the third week, the Buddha saw through his minds the delusion in Gods mind in heaven about that whether he has really achieved the enlightenment or not. Henceforth, he created a golden bridge in the air and walk fro and thru it for a whole week.

During the fourth week, he generates a beautiful jeweled chamber and sat inside it meditating, which is now also known as detailed teaching or Abhidhamma. His body and soul were so much purified that, the six different color rays reflect from his body. The six colors were red, orange, blue, yellow, white and a mixture of these which gives out a Buddhist flag.

In the fifth week, while meditating under a banyan tree. The three beautiful girls came up in front of him and try to seduce him through seductive dance in a cajole way. The every temptation was failed in front of Buddha meditation and Tanha, Rati and Raga return their own way.

During sixth week, Buddha went to meditate under a Mucalinda tree. And it began to rain during the course of meditation. In order to protect a huge king cobra appeared to him and coiled his body seven time to keep his body warm as well cobra placed his hood over the Buddha’s head to protect. The rain stopped after seven day, the King cobra turned out to be a man and pay his respects to Buddha. The Buddha than offered his sacred lessons of happiness to the man.

In the last seventh week, Buddha meditated under the Rajayatana tree. On the fifth day of his fasting, the two merchants Tapussa and Bhallika appeared to him and offered him rice, cakes and honey to break his fasting. The Buddha then told the lessons to them he achieved during his enlightenment. Later these two merchants become the first disciples of Lord Buddha.

Antique fragment of an Indian temple