Belum Caves is the largest and longest cave system which is open to the public on the Indian subcontinent. The caves are located near Belum village in Kolimigundla Mandal of Kurnool District in the state of Andhra Pradesh. This cave is also known for its speleothems, such as stalactite and stalagmite formations. The cave includes long passages, galleries, spacious caverns with fresh water and siphons. It is believed that the formation of this cave was due to the constant flow of underground water over the course of tens of thousands of years. The cave system reaches its deepest point, Pataalanganga, which is 46 m deep from entry level. The total length of Belum caves system is 3,229 m which makes this cave second largest natural cave located at the Indian subcontinent.

As the cave was excavated, it was found that the caves include Buddhists arts and relics which are now housed in Museum at Ananthapur. Archaeological survey of India also found remnants of vessels of the pre-Buddhism era and these remnants are believed to be from 4500 years BCE. Therefore, the site is historically important. 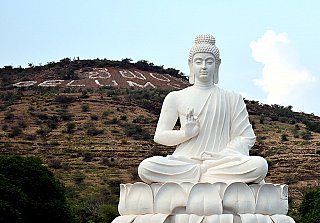 Pillidwaram: Literally, pillidwaram means cat’s gate. The gate is in the shape of a lion’s head which is formed naturally.

Patalaganga: Patalaganga is a small perennial stream located in the Belum cave. This stream flows from the southeast to northwest and disappears into the depths of the earth. The local people residing around that locality believes that the stream is headed towards a well at the Belum village. The village is located 2 km away from the Belum Cave.

Saptasvarala cave or Musical Chamber: Saptasvarala cave is the chamber of seven notes. The natural stalactite formations in this chamber help to produce the musical sounds when these are struck with a wooden stick or knuckles. This chamber was opened to the public in 2006.

Mandapam: Mandapam is the huge area inside the cave. This area is equipped with magnificent stalactite structures on either side. Therefore it resembles the pillar supporting the ceiling.