Kizil Caves are excellent examples of Buddhist rock-cut caves situated in Baicheng County, Xinjiang, China. The caves are located on the northern bank of the Muzat River 65 Kilometers west of Kucha. It is believed that the caves are the earliest major Buddhist cave complex that was built between the period of the 3rd and 8th centuries in China. 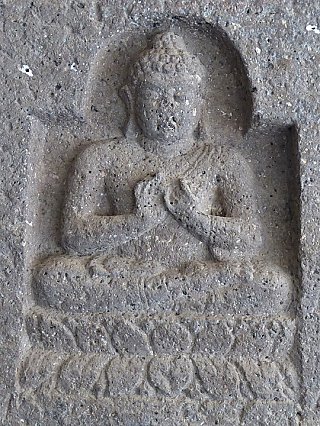 In Kizil, it is recorded that there is almost 236 cave carved into the cliff which stretches from east to west for a length of 2 km. Among these caves, around 135 are still intact. While excavating the site, it was found that radioactive carbons of the site were dated to around the year 3rd century. Therefore, It can be assumed that the earliest caves date to the year 3rd century. It was also believed that the caves were abandoned around the beginning of the 8th century.

The other caves were built with the central pillar design with the objective to circumambulate around the central column. This column was regarded as the stupa. In front of the column, a large vaulted chamber is placed. The cave also includes the smaller rear chamber behind of which has two tunnel-like corridors which link the spaces. It is assumed that the large chamber may have housed Buddha statue along with other statues which may be the focus of the interior. The rear chamber may house Buddhist arts: Buddha statue or the mural with parinirvana theme. But at present context, the pilgrims would not find any of these statues due to various reasons.

Murals at Kizil caves mostly depict Jataka stories, avadanas, and legends of the Buddha which were painted in three phases. The first two phases showed a lack of Chinese elements while the last phase showed Tang Chinese influences. The notable features of the murals in Kizil caves is the extensive use of blue pigments along with the ultramarine pigment derived from lapis lazuli from Afghanistan. Another characteristic of the murals is the division of murals into diamond-shaped blocks in the vault ceilings of the main room of many caves. In these diamond shapes, Buddhist scenes are depicted. These diamond shapes were painted on top of one another to show the narrative sequences of the scenes.

As it was mentioned in the text found in Kucha, the paintings were supported by a Tokharian king called Mendre with the suggestion from the high ranking monk of the kingdom, Anandavarman. It is also mentioned that the king ordered an Indian artist, Naravahanadatta, and a Syrian artist, Priyaratna to paint the murals. Not only the Tokharian king but neighboring Khotanese kings Vijayavardana and Murlimin also supported the project by sending the artists.

As with the statues, Murals at the caves were subjected to loot, damage and transfer to museums. Even with these acts, the Kizil caves still has around 5000 sq. meter of Buddhist wall painting remained. In 1906, the German expedition team of Albert Von Le Coq and Albert Grunwedel explored the Kizil Caves. Both had different purposes for the expedition, as for Grunwedel it was to copy the murals but for Von Le Coq it was to transfer the murals to other places. He took the murals and then placed most of the fragments in Museum of Asian Art in Dahlem, Berlin. Similarly, other explorers also took the murals and placed the murals in different museums in Russia, Japan, Korea, and the United States.