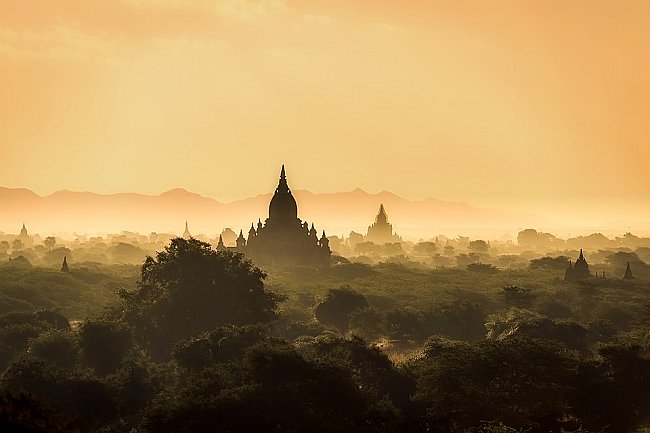 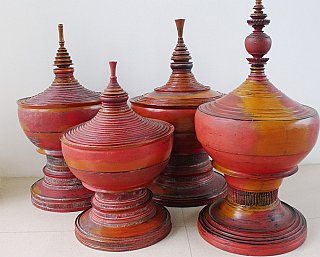 Among the great artistic achievements of the people of Myanmar is yun, the generic name for lacquer in Myanmar. Durable and beautiful items are produced by a time-tested method, the vital element of which is the sap from the Melanorrhoea ustitata tree. First of the object to be lacquered is structured from either bamboo or wood. The lightest, most pliable lacquer wares are made in interwoven bamboo strips and horsehair. Other fine wares are made of woven and interlaced bamboo strips. Soft woods are used for screens, folding tables and rectangular boxes, and teak for heavier pieces. For bamboo, a dried bamboo trunk is cut into strips which may be coiled, woven or twisted as the shape of the object requires. When the basic form is completed, it is sealed by a coat of lacquer mixed with fine clay. It is then put into a special cellar to dry for three to ten days. Afterwards, it is smoothened and polished with pumice on a simple hand lathe, where upon another and finer sealing layer is added and the object is put back into the cellar. This process is repeated again and again until the item is completed smooth. Finally, it is given a coat of fine, glossy-quality lacquer.

Several steps of sealing, polishing, drying and lacquering take place before an object is ready for final decoration. The lacquer which comes from the sap of the wild Melanorrhoea tree is naturally black. Different colors are produced with the addition of different elements: red by the addition of different orpiment, blue by indigo, and green from a mixture of yellow and green. Blue was rarely used traditionally as a separate color.

More precisely, the term yun is the name of a gloriously imaginative incised lacquerware. Here, the artist can show his capacity to bring legends to life and introduce a plethora of lively motifs. The style originated in China, and how it came to Myanmar and to be centred in Bagan is still debated. The technique demands skill and patience. An object already covered with a glossy coat of lacquer is incised sequentially with elements of an overall design to be presented in chosen colors. Supposing, for example, the background is black. The artist, working freehand, might first incise lines to be filled with red. The surface of the object is then entirely covered with the colorant, ensuring that the lines are also filled with red. It is then placed in a drying cellar for three or four days, after which the excess or red is removed by polishing on a lathe. The color is sealed in by a coating of resin. When this is dry, the engraving of the second color begins and the process continues through the next colors.

Kyaukka, in the lower Chindwin District, is responsible for many simple, but elegant lacquer articles for household and monastery use. Most are made from woven matting and coiled bamboo, lacquered black or red or a combination of the two. Some are clearly local in style. Prominent among them is a much sought after Kyaukka version of the hsun-ok (a votive receptacle).

View our gallery with different Buddhist arts and crafts

Shwe-zaqa (gold-leaf design lacquerware) is less time consuming to produce than yun ware, but is just as demanding artistically. First, on a highly polished lacquer surface, the artist carefully blocks off the areas not to be gilded with a covering of orpiment and the gum of theneem tree. By so doing, he creates a negative design for the application of gold. Then a coat of fresh lacquer is placed on the blank areas and the entire surface of the object is covered with gold leaf. When the newly lacquered areas are almost dry, the surface is washed with water. Gold on the areas covered by orpiment is washed away, revealing a brilliant gold design on a shinylacquer background. The object is then allowed to dry in a special cellar. The technique derives from Thailand, where it is called laay rot nam or "design from washing". When only small areas are gold-leafed, positive designs are made by drawing sketches at the desired places; lacquer is placed on them and then gold leaf. When they are almost dry, the gold leaf is washed off.