The Pagan kingdom was the first unified region which consecutively forms a base for constituting modern day Burma or Myanmar. It has its own history, culture, traditions and religion. Majority of the peoples follow Buddhism (Theravada Buddhism). The archeological aspects found in Myanmar are truly based on the custom the local tribe inherit form the very beginning of civilization. The temples, diversity in cultural ambience was at peak in Myanmar during the Bagan period, which was conquered and demolished by Chinese and Tai Yai in 1347. Artisans and devotees of Buddhism in Burma are greatly influenced by the principles of Lord Buddha and Buddhist art which are visible all over the world. The sculptures are inspiring and a feeling of piety can be observed in Myanmar Buddhist art. The Buddha statues and images of Bagan period are found to be leveraged from the early Pyu style and the Indian Pala style. Certainly, the Bagan period Buddhist arts are the most desirable and expensive antiques form Burma. Similarly, the Toungoo period, Ava, Amarapura Period, Mandalay Art came into existence as sign of ever ending inclination towards Buddhism. 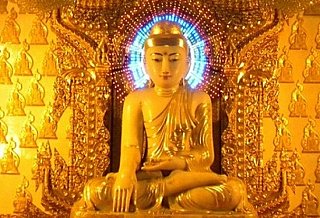 However, Myanmar Buddhist art is world famous for its uniqueness and originality. All of the Buddha statues, artifacts are antique carries a special values within it and presents the common sentiments and beliefs of Myanmar people since ages. Four of the ancient Bagan period Buddha sculptures was taken from a pagoda which was the 11th century religious artifacts. One of the detriment sandstone Buddha is highly regarded by scholars as an integral part of Myanmar heritage. The sculptures were later then returned to its origin Myanmar after visiting many countries. Some of the rare and antique pieces are still preserved in the museum of Britain. Those Buddha statues, religiously highly regarded ornaments and artifacts of Buddha were taken from Burma to Britain during the British reign in 18th century. Though lately there have been Buddha statues which are fakes. But still the authentic pieces are conserved in museums, monasteries and temples. If you want to have a glance of these rare pieces, the historically prominent and secured places by national personnel had made it possible. The factor which has led Buddhism to be alive for more than 2500 years is only due to the devotion and beliefs of followers. Apart from these Buddha principles are realistic, capable of devouring you happiness and prosperity from all the misery of your life. These aspects had greatly motivated craftsmen and followers for sculpting Myanmar Buddhist art. If you are searching the best place to buy Myanmar Buddhist artifacts, then Antique Buddha Statues holds the large collection ofantique Buddha pieces.

Myanmar Buddhist Art in our gallery

Our online gallery holds the variety of Buddha artifacts which carries significant values. All of the antiques we have are really authentic brought up from temples, monasteries of Myanmar. Further, we directly deal with the artisans and vendor who supply original Buddha statues and accessories. If you want to buy Buddha statues, we have a variety of collection here in Netherland. Visit our website browse the gallery and order of your own choice.

Antique fragment of an Indian temple